What is a Reference Angle, anyway?

Imagine a coordinate plane. Let’s say we want to draw an angle that’s 144° on our plane. We start on the right side of the x-axis, where three o’clock is on a clock. We rotate counterclockwise, which starts by moving up. We keep going past the 90° point (the top part of the y-axis) until we get to 144°. We draw a ray from the origin, which is the center of the plane, to that point. Now we have a ray that we call the terminal side. But we need to draw one more ray to make an angle. We have a choice at this point. Our second ray needs to be on the x-axis. If we draw it from the origin to the right side, we’ll have drawn an angle that measures 144°. If we draw it to the left, we’ll have drawn an angle that measures 36°. This second angle is the reference angle. It’s always the smaller of the two angles, will always be less than or equal to 90°, and it will always be positive. Here’s an animation that shows a reference angle for four different angles, each of which is in a different quadrant. Notice how the second ray is always on the x-axis.

How is the Reference Angle Useful?

The reference angle always has the same trig function values as the original angle. Notice the word values there. The sign may not be the same, but the value always will be. This is useful for common angles like 45° and 60° that we will encounter over and over again. Once we know their sine, cosine, and tangent values, we also know the values for any angle whose reference angle is also 45° or 60°. As for the sign, remember that Sine is positive in the 1st and 2nd quadrant and Cosine is positive in the 1st and 4th quadrant.

How do We Find the Reference Angle without a Calculator?

How we find the reference angle depends on the quadrant of the terminal side. 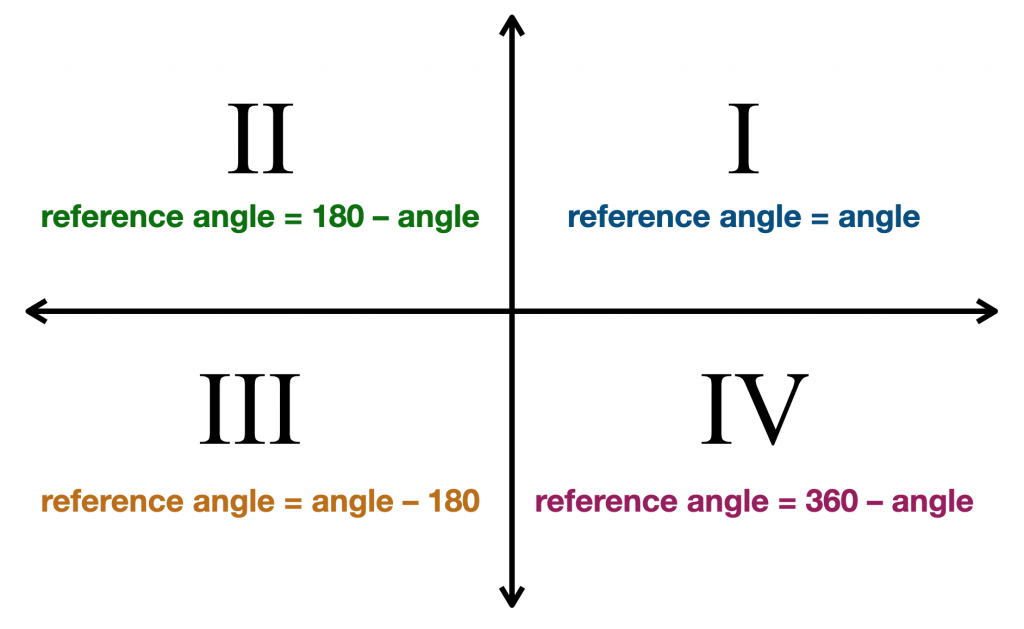 What if Our Angle is Negative?