How To Find The GCF And LCM

In this article, you will learn how to calculate the Greatest Common Factor (GCF) and Least Common Multiple (LCM) of integers. These skills are helpful in a variety of different situations. Let’s see what they are all about! 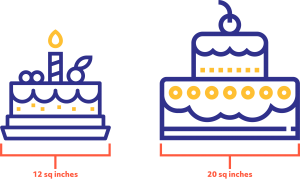 “No problem,” your mom says, “I’ll just cut the cakes into 4-square-inch pieces. That way, everyone will have a same-sized piece.”

How in the world did she know that?

Before we explore the cake situation, let’s remember what factors are. Factors are numbers that, when multiplied, produce another number. Usually, we talk about factors in pairs. 1 and 8 are factors of 8 because 1×8=8. The numbers 4 and 2 are also factors of 8, because 4×2=8.

Numbers have a unique prime factorization. Recall that prime numbers, like 2, 3, and 5, can only be divided by themselves and 1. We can keep dividing the factors of any number into its prime number components. So, any number is composed of a unique set of prime numbers multiplied together. Take a look at these factor trees and what they tell us: 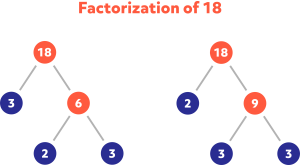 The number 18 is initially factored two different ways: 3 and 6 and also 2 and 9.  We can see the prime factorization is the same, regardless of our first factor pair.

What does this have to do with the two cakes?

Mathematically, your mom calculated the Greatest Common Factor (GCF) between 12 and 20 to be 4.  In other words, 4 is the largest factor that both numbers have in common.  We can see it by looking at the prime factorizations of both numbers: 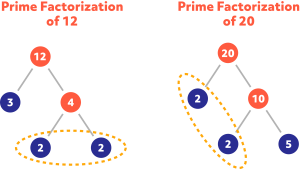 Both numbers have common prime factors of 2 and 2.  2 x 2 = 4. This explains how your mom knew to cut both cakes into 4-square-inch pieces! 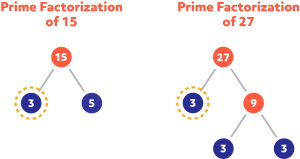 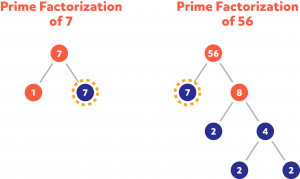 The number 1 is not a prime number, but it is the GCF of 7 and 13, which are both prime numbers.

Let’s briefly return to the cakes. Your mom found that:

and that the GCF is 4, so she should divide the cakes into 4-square-inch pieces. Look at the numbers that are not part of the GCF:

Suppose 60 girls and 48 boys want to play in a kickball tournament. What is the greatest number of teams that can be formed that have the same ratio of girls to boys? How many girls and boys would each team have? 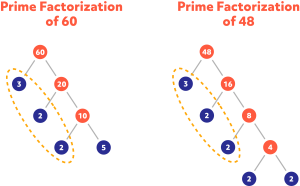 You’re craving hot dogs, so you head to the store and pick up a pack of dogs and a pack of buns. Typically, a package of franks contains 10, while a pack of buns contains 8. This brings us to one of the great mathematical quandaries of our time. After you eat 8 dogs, you’ll have 2 left, but you’ll be out of buns. You’ll need another pack of buns so the dogs don’t go to waste. Of course, after you eat those, you’ll have 6 buns and no dogs. Off to the store you’ll go, once again, and the cycle continues. 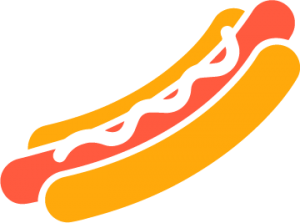 In order to figure out the hot dog problem, we need to find the Least Common Multiple (LCM) of buns and dogs. We need the lowest number that is divisible by both the number of dogs in a pack and buns in a pack. Once we find that number, we can figure out how many packs of each to buy so we don’t have any leftovers.

Let’s start by listing out some multiples of dogs and buns:

Prime factorization can be used here as well. Finding the LCM this way is sort of the opposite as when finding the GCF. For GCF, we want the common factors. For LCM, we want the unique factors. If a factor occurs in both numbers, we want the highest power of that factor. Here goes! 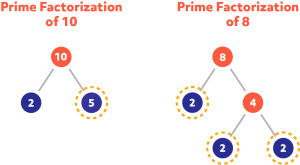 To calculate the LCM, we first need the 5 from factoring 10. Notice that 2 occurs as a factor of both 10 and 8. Remember, we need the highest power of 2: 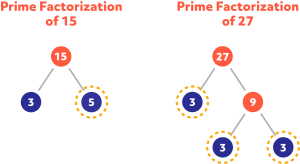 The factorizations of both numbers contain 2 and 3 and the highest power of both of them is 2. 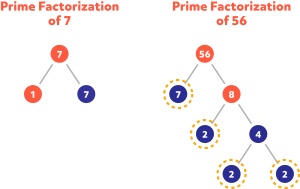 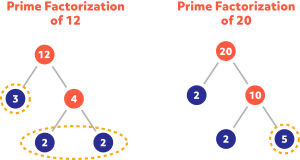 There is an east-west train that stops at the station every 8 minutes. When is the next time all 3 trains will be stopped at the station at the same time?

When experimenting with factors and multiples, the GCF and LCM often prove useful. Their skills can come in handy for calculations, such as simplifying fractions. However, as we’ve seen, these extend our understanding of multiplication and division, pushing us to truly grasp what it means for a number to be a factor or a multiple, and allow us to make sense of authentic situations. The best part is, all you need to do to practice is pick some numbers. We mostly practiced with two at a time, but you can find the GCF and LCM of any group of numbers. Give it a shot!